The Best Anniversary Gifts For Him 2018

Buying the perfect anniversary gift for the man in your life can be a confusing prospect. What do men want? Do men actually want anything? Should I just get him another pair of socks? These are all questions you’ve no doubt been asking yourself and, being men ourselves, we feel well-equipped to answer them.

Choose something from our selection of stylish anniversary gifts, and you can be sure that the grin on his face when you give it to him will be genuine and not just a forced grimace before he quietly discards it in the back of the wardrobe never to be seen again. Ladies (and fellas), we’ve got your back.

Just like birth, death and the changing of the tides, men’s love for watches is a fact of life. Plain and simple. However, just as those tides change, so do trends. With that in mind, a timeless ticker is always going to be the way to go.

Forgo rubber bits, calorie counters and flashing LED lights in favour of clean designs, classic faces and simplicity. When he’s still proudly rocking it 20 years in the future you can fire us a quick telepathic iMessage using your government-issued Apple iBrain implant to say thanks for the sage advice. 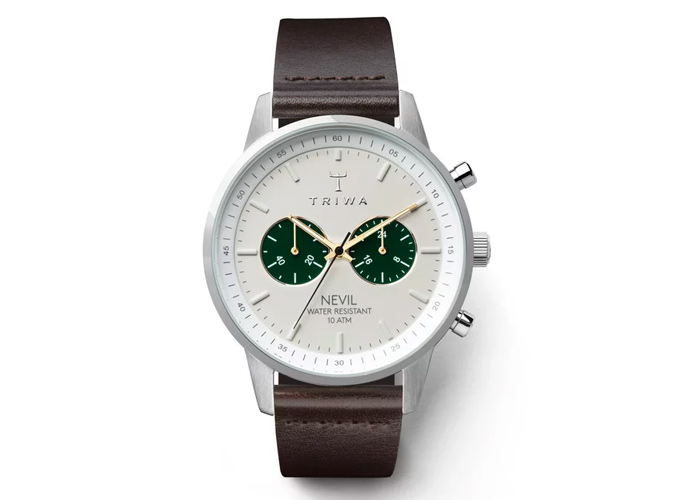 As far as male wardrobe staples go, they don’t come much more essential than a good pair of jeans. The importance of this humble garment is often underestimated, leading many blokes to settle for either Jeremy Clarkson-esque bootcut denim or reality TV-inspired, muscle-fit sausage casings.

Save you both some embarrassment in public by getting him some decent selvedge denim. It’ll fit better, last longer and won’t leave him looking like an ageing car-enthusiast or a Geordie Shore cast member. Can’t say fairer than that. 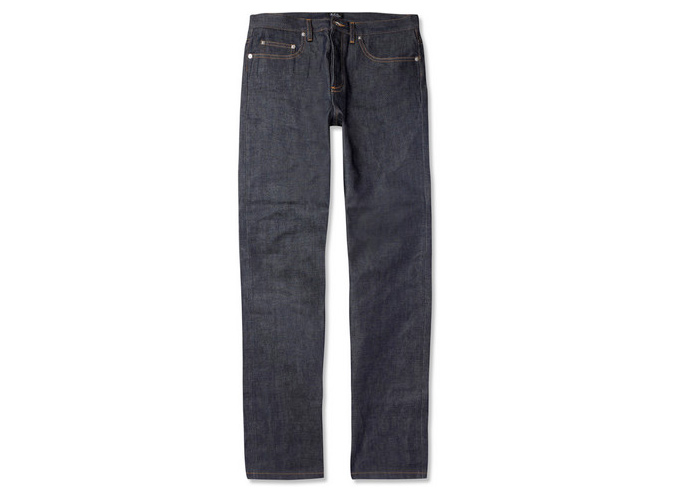 We don’t know what will be going on 100 years from now. Will humankind have managed to stop global warming? Will scientists have reversed the ageing process? Will the robots have taken over? No way of knowing. But one thing we’re sure of is that men will still be wearing Oxford shirts.

A preppy button-down in a classic colourway slides nicely into almost any outfit, so what better garment to give him to celebrate a long-lasting relationship than this time-tested wardrobe staple? 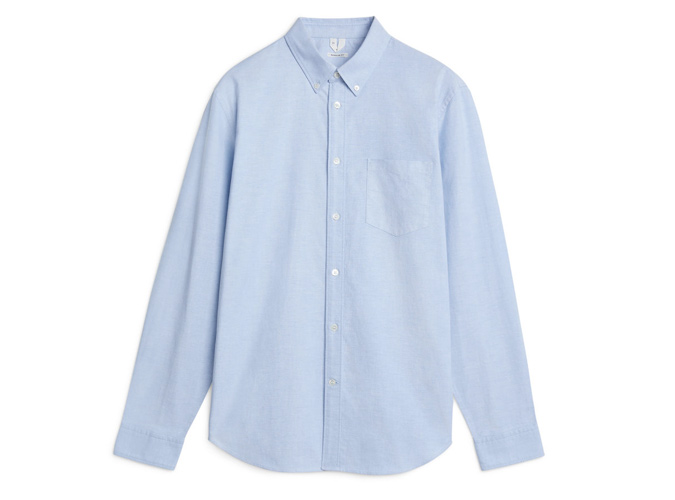 If your man is the type to think a supermarket carrier bag is an acceptable receptacle for everyday items, use an anniversary as an excuse to push him in a better, more stylish direction.

A neat holdall or duffel is a must-own for every man, capable taking him from office to gym, to holiday in style. Or splash out on a leather weekend bag, to ensure all forms of crumply plastic stay in the kitchen cupboard, where they belong, for good. 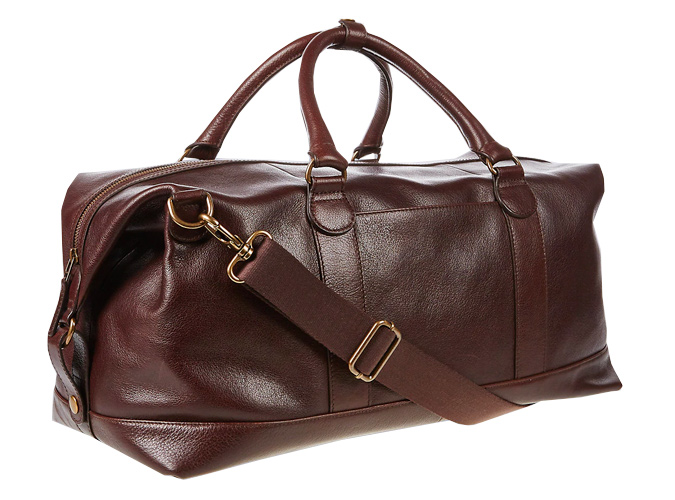 Ever fancied a personal photographer to help keep your Instagram on lock? Well, this could be your golden opportunity.

A one-off payment for a quality camera, compared to the tens of thousands you’d be paying to employ a professional lensman every time you want to update your feed, seems great value for money. There’s something to smile about. 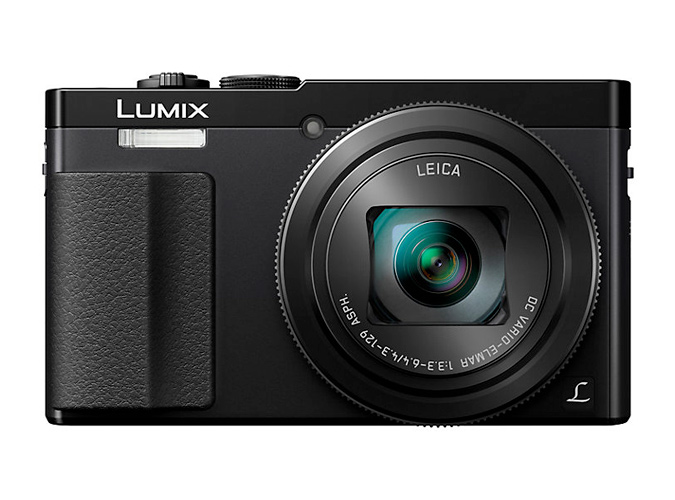 Novelist Raymond Chandler once said: “There is no bad whiskey. There are only some whiskies that aren’t as good as others.” If that’s to be believed, it makes a bottle of the good stuff a pretty safe bet for an anniversary gift.

If your other half fancy himself as a bit of a drinks connoisseur, consider adding a special bottle to his bar. Take it to the next level with a scotch single malt; a double whammy if you like it too, as the drinks will be pouring in. Literally. 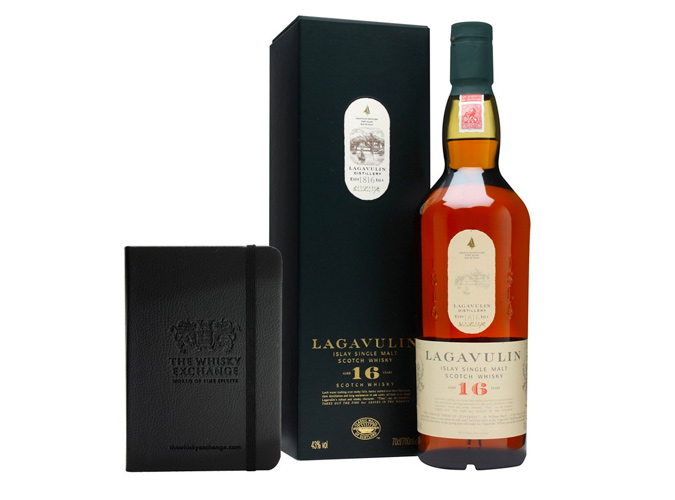 Are you sick and tired of pestering your significant other to get off his phone? Well, a new tablet is guaranteed to get his attention focused elsewhere.

Granted, it will just be on another, slightly bigger screen – but that’s something, right? Okay, perhaps not, but this is the 21st century, so you’d better get used to it. 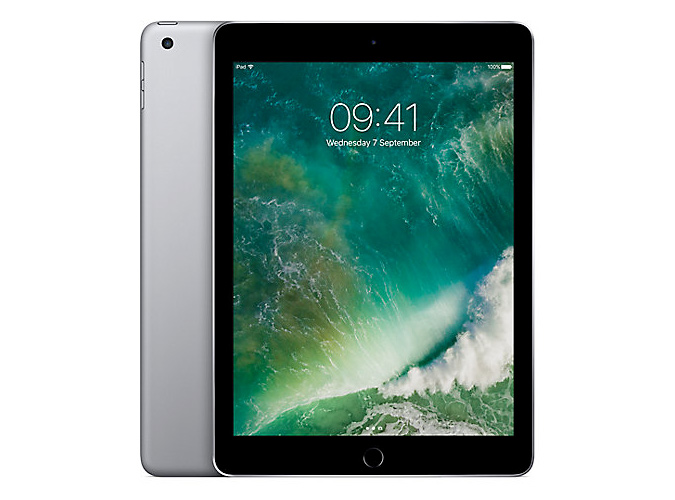 The Gift Of Music

Gone are the days when all that was needed to show your undying affection for someone was a cheesy mixtape. This is a digital age we’re living in, and an outdated media format packed full of Phil Collins songs just doesn’t quite say ‘I love you’ in the same way it used to.

Instead, sign him up for a streaming service where he can access all of his favourite tunes, audiobooks and more. He’ll thank you for it, we guarantee. 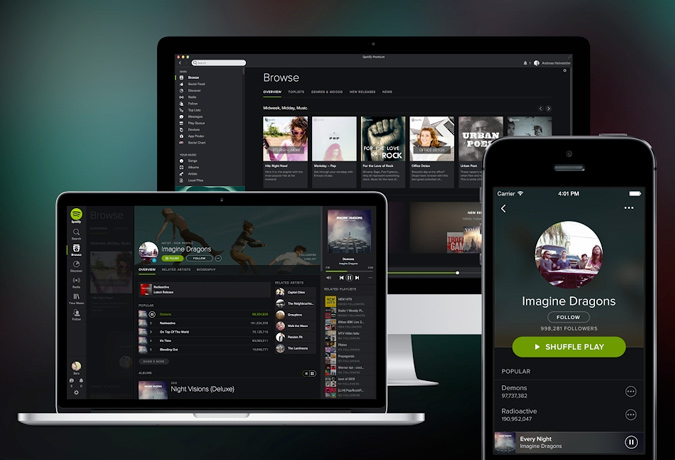 Somewhere, sometime long ago, an unknown maverick gazed upon a flock of sheep and thought to themselves, “I’m going to shave them and wear it”. In daring to dream, this unsung hero unknowingly forged the way for you to buy the man in your life the perfect, woolly, anniversary gift.

Because who doesn’t love the tactile insulation of stylish knitwear? No one, that’s who. Opt for ultra-soft cashmere or Merino wool in a neutral colour for maximum cost-per-wear ratio. 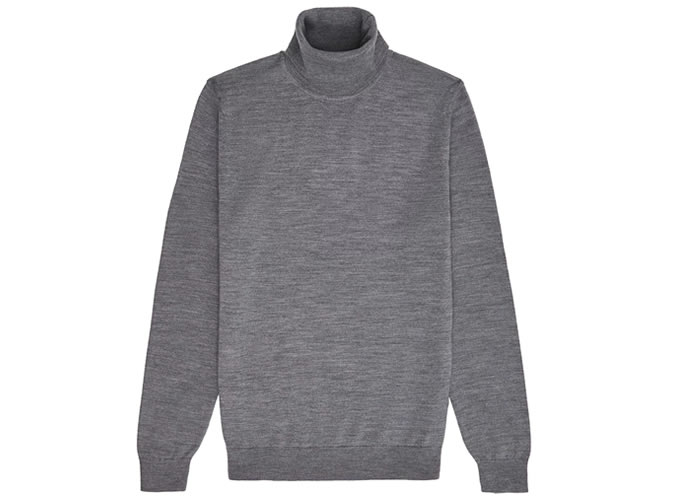 No one wants to have to explain why their man’s trousers keep falling down in public places. Put a stop to it in style by picking up a handsome belt for him this anniversary.

Timeless, classic and functional – a brown leather version is a versatile casual accessory, guaranteed to hold those keks firmly in place. Now just to teach him about matching it to his shoes. 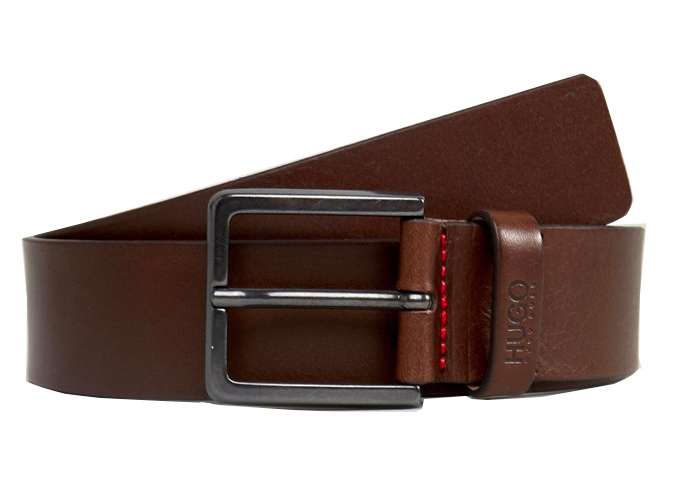 Commutes are hellish, there’s no two ways about it. But you can make his that little bit less soul destroying with some high-fidelity headphones.

Guaranteed to drown out everything from that blood-curdling screech the train makes going around a corner, to babies crying loudly on buses, you’ll be buying him a little extra time to relax when life is hectic. That’s a pretty invaluable gift. 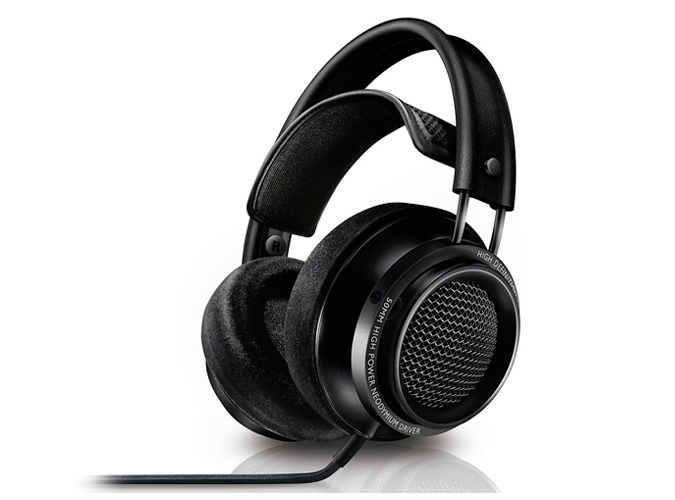 Sure, he might like to pretend to be a tough alpha male, but chances are there’s a softy underneath, and a book filled with photos of all your happiest memories together will never fail to bring a tear to his eye.

Make sure he has a tactile way to look back, rather than relying on a load of files on a computer that may or may not go kaput at any given moment. 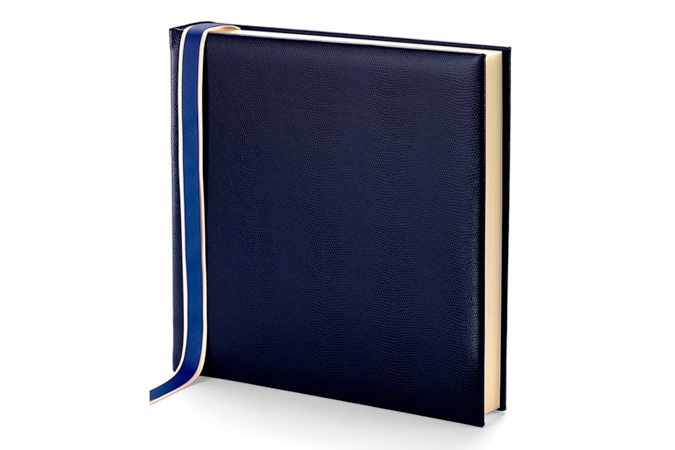 A boxy briefcase is all well and good for the City finance guy who wears a shiny watch and points angrily at colourful numbers on multiple computer monitors while shouting at people down the phone.

If this doesn’t sound like your other half, getting him something more laid back to cart his laptop around in. All the functionality of a rigid design, but he can carry it while wearing jeans without looking weird. Perfect. 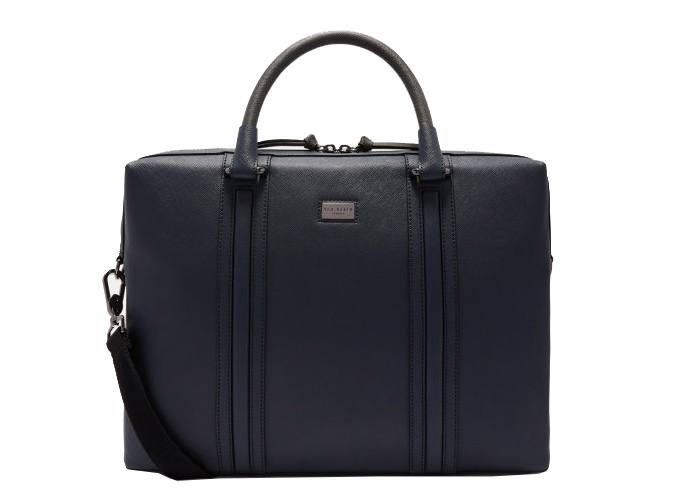 The rate at which trainer technology is advancing, it won’t be long before they can jog down to the gym and do our workout for us while we sit on the sofa watching Netflix and eating Doritos.

In the meantime while that dream remains slightly out of science’s reach, you can treat him to some top-of-the-line running shoes with some pretty astounding features like knitted uppers and energy-return soles. 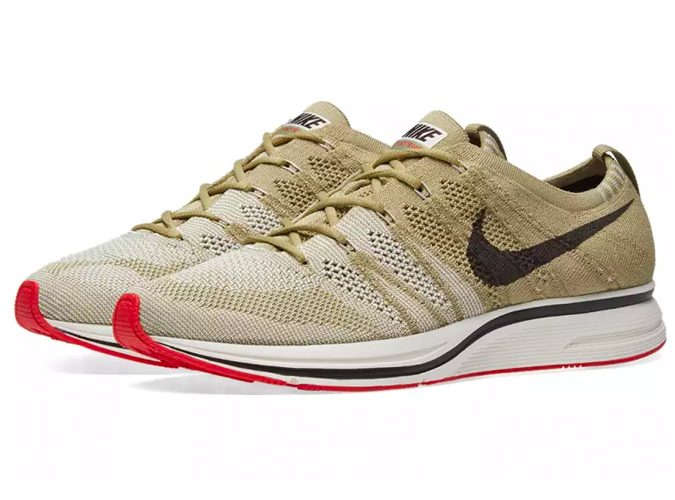 Something For The Coffee Table

The function of a man’s coffee table books is twofold. Firstly, they’re good for flicking through while lounging about on the sofa. Secondly, they let everyone who visits know how cool and interesting he undoubtedly is.

That said, they’re not really the sort of things most guys purchase for themselves, so help him out and get his collection going with a picture-heavy tome that is far more classy than scrolling through Instagram. 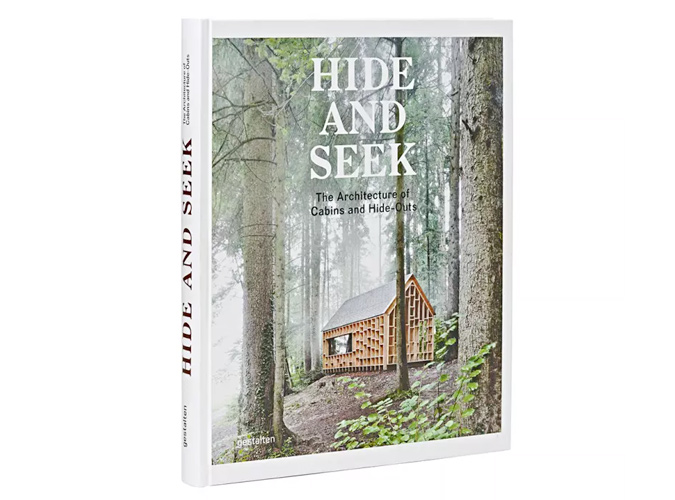 Maybe it’s a man thing, but there’s something deeply reassuring about wearing a top layer that you have full confidence could hold its own if you somehow ended up lost in the Alps on your way to the pub.

We know that’s an unlikely scenario, but why take the risk? Get the love of your life a quality winter coat he can rely on while looking great at the same time. 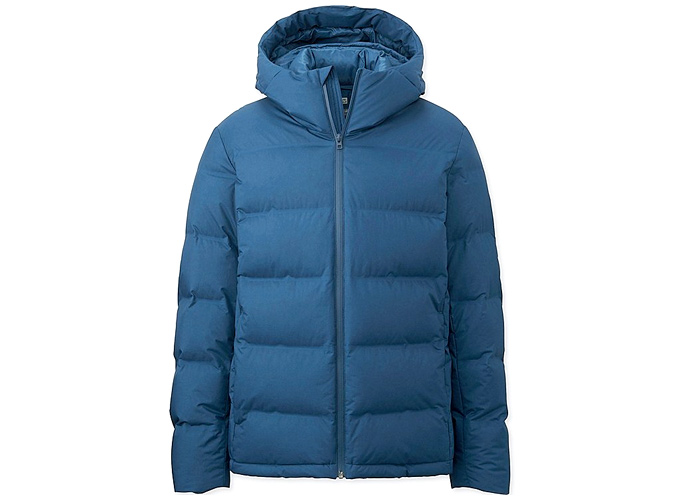 We might have hit ‘peak beard’ several years ago, but if he’s still struggling to let go of that unruly chin wig, give him a little nudge in the right direction.

On the other hand, if he’s all about those carefully carved cheek lines, make his preening routine that little bit smoother with a beard trimmer that will snip him into shape. 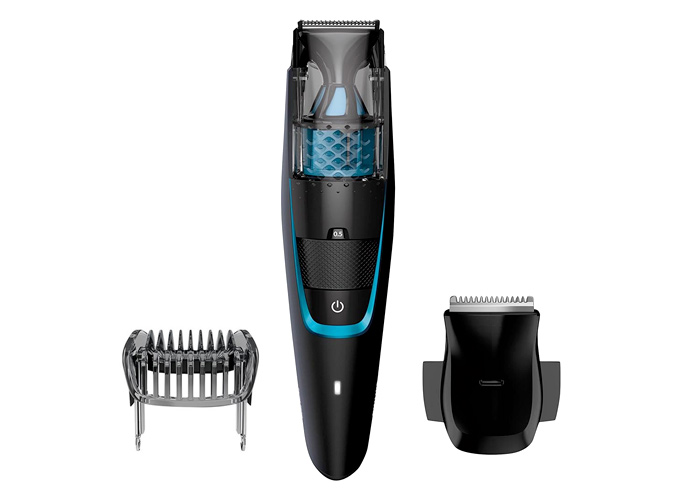 The best men’s fragrances do more than just make a geezer not smell like a cocktail of sweat, beer and engine oil. Some even contain ingredients that have a genetic effect on those around them.

Take hedione, which appears in plenty of big hitters and has been found to stimulate the brain’s release of sex hormones. We’ll just leave that there. 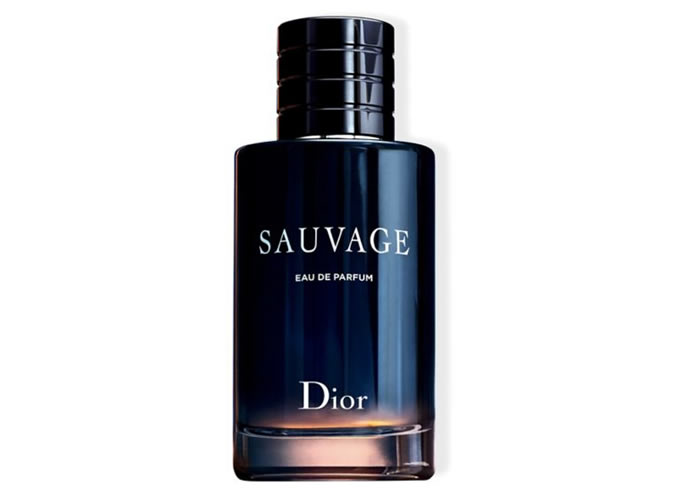 If he drops, breaks and has to replace his new phone, you can wave any hope of a holiday together goodbye, so it’s in your interest to buy him a case.

Prioritise styles that won’t turn his gadget into a five pound-clunker, in a colourway that fits with the rest of his wardrobe. 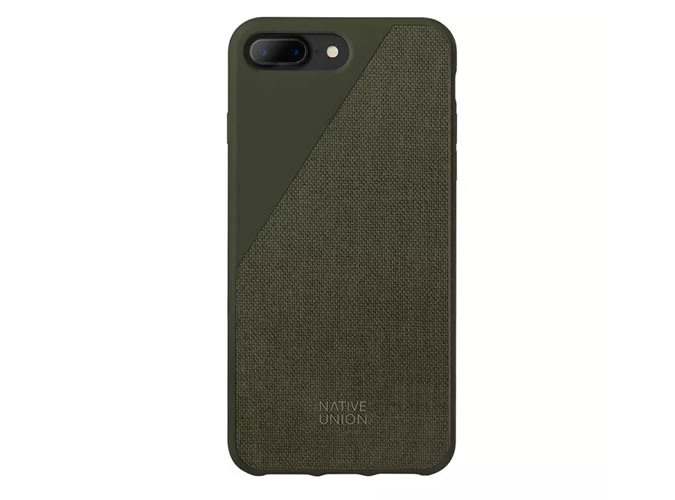 A Cup Of Joe

You like Joe, he likes Joe; heck, we all like Joe. In fact, you should date Joe. Okay, before we break up a happy relationship, we’re actually talking about coffee.

Every bean buff from here to Columbia knows the best java comes from grinding up the good stuff, so make the job easier first thing in the morning with an electric blitzer. Here’s a present you both benefit from. 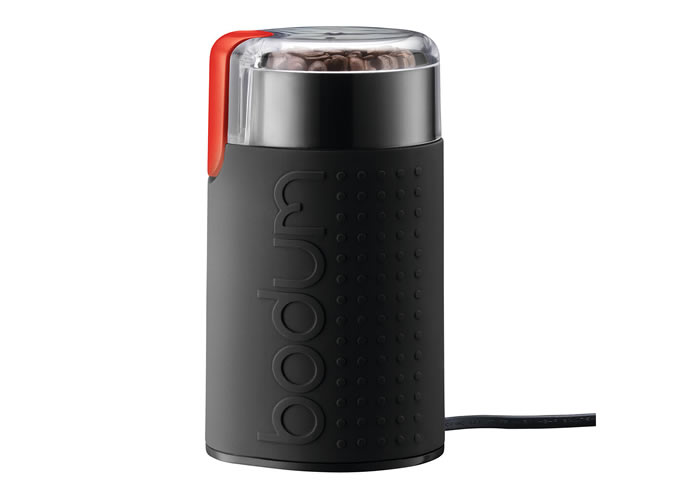 Nothing kills Mad Men vibes quicker than scraps of paper scattered about a desk. So help your fella boss the boardroom with some stationery that means business.

Alongside a pen that isn’t a chewed-up biro, he’ll need a notepad that says “I mean business”, even if it is just full of doodles. 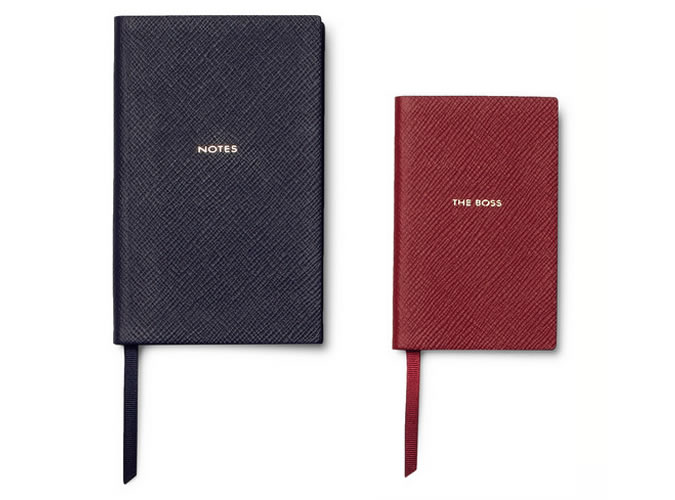 How To Give A Great Best Man Speech

Wedding season is here. Which that means while both brides and grooms worry about whether the other one will show up, men everywhere are waking in cold sweats over the thought of giving a best man’s speech. And no, it’s not just you – every best man gets the pre-speech jitters.

How To Gain Weight The Healthy Way

Fitness is on what you might call a bulking phase. As of May 2017, there were almost 10m Brits sweating away at the gym every month, according to market aggregator Leisure DB, an increase of 5.1 per cent on the previous year. The same report also values the UK gym industry at a staggering £4.7 billion. In the US, over 55 million people had a gym membership in 2015, with figures no doubt continuing to climb in the years since the data was collected.