How To Give A Great Best Man Speech

Wedding season is here. Which that means while both brides and grooms worry about whether the other one will show up, men everywhere are waking in cold sweats over the thought of giving a best man’s speech. And no, it’s not just you – every best man gets the pre-speech jitters.

The question is: what makes a great best man’s speech?

Should it be funny or sentimental? Does it need to be just about the groom, or will that upset the bride? How long should it be? What’s a safe amount of tequila to drink before? What stories can you tell without giving an elderly great-aunt a heart attack?

For some proper advice (by which we mean, from a professional who knows what they’re talking about – not the lads’ WhatsApp group), we turned to Kye Harman from online resource Simply The Best Man.

“Keep your speech well timed and sincere,” says Kye. “Mix the jokes with kind comments, but most of all make it fun, everyone is looking to you for some light relief in what can often be a drawn out part of the wedding, they’re on your side and what you to be good so relax and enjoy it.”

Keep It Short and Sweet

It’s no secret that for the average non-immediate family guest, weddings can be a slog – half an hour of standing outside the church, an hour of the vicar droning on, father of the bride boring everyone to death, and more faffing about before you can get stuck into the free booze, food and disco.

There’s no need for you to drag it out any longer. In fact, the best man’s speech is your chance to perk things up.

“A good speech should run for around seven minutes,” says Kye. “That’s plenty of time to give the groom the comedy roast he deserves, land a few blows, give some sincere words and fit in the embarrassing story of how he got that tattoo without boring people. It is just a speech, not a stand-up comedy routine. To get the timing right practise saying your speech out loud and leave pauses for the laughs and standing ovation.” 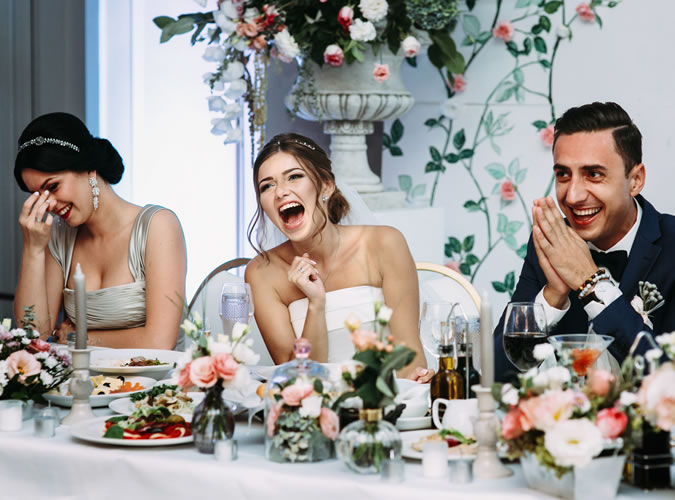 Practice, of course, really is key. Because let’s face it, knowing what to say in the best man’s speech, or how long to talk for, is scary enough, but the thought of forgetting what you’re supposed to be saying, freezing up while everyone points and laughs at you, or fainting out of pure nervous tension mid-speech, is the stuff of actual nightmares.

Famous speeches are effortless, so learn the material, rehearse it, and just when you think you’ve got it down, do it all again. “Practice, practice, practice,” says Kye. “The more you practise your speech out loud the more familiar it will become and the more comfortable you’ll feel. Also read it to someone else to get feedback.

“Print or write your speech on small cards rather than one sheet of A4 – they’re easier to hold, they won’t shake as much plus it’s easier to remember each small card than a hold speech. And never underestimate breathing – yes, you have been doing it for years and rarely forget to do it, but controlled breathing can reduce adrenaline which causes nerves.”

Do Your Duty & Keep It (Mostly) Clean

But we’re getting ahead of ourselves. First up, you need to know exactly what should go into the speech – the kind of things you should talk about, formalities to include, and the type of jokes that will be acceptable. And don’t forget, as best man you do have some official duties beyond organising the stag.

“As best man it’s your role to reply on behalf of the groomsman and bridesmaids for any thank yous or gifts from the happy couple,” Kye says. “At the end of your speech you should read any messages/emails from people who couldn’t make it on the day – check with the groom for these.

“And most importantly, don’t ****ing swear! What is funny to the groom and his mates won’t go down so well in front of a mixed age group with children present so keep it clean.” Four-letter rants, strip club memoirs, and Amsterdam adventures are definitely off the table. 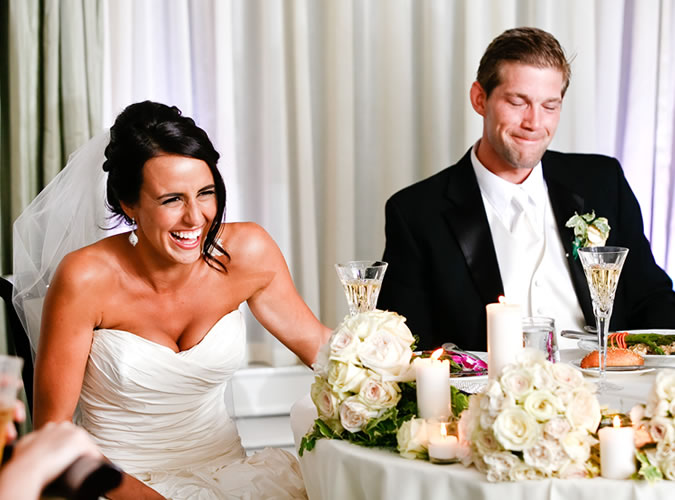 Don’t Drink Too Much

It seems like basic common sense, but it’s all-too-easy to glug down alcohol when you’re feeling nervous. Before you know it, you’re half-cut, inhibitions lost (not in a good way), and dangerously loose-tongued. You can get away with a pint at best, or one glass of complimentary champagne (it’s free after all), but that’s your lot.

“Alcohol can actually dry out your mouth, stick to water while giving your speech,” says Kye. “While a few glasses of scotch might feel like they’re settling your nerves they could actually make you feel a bit too confident. Save the drinking until after your speech, then you’ll truly have earned it.”

Have A Killer Opening Line

No pressure, but you need something funny to open the speech – something to let guests know you’ve got the charisma and gags to hold their attention. We asked three comedians appearing at the Edinburgh Festival for some speech opening one-liners that would knock ‘em (not literally) dead.

“I’m the Best Man. At the wedding. But also generally.”
“A good marriage is like an over-80s tennis match: endless love.”
@BenWPope

“I love weddings, you spend years planning the day, and pour thousands of pounds into getting your mates wasted.”
“Love is rare and special unless you’re [the groom] in which case it’s something you give away in a toilet after half a shandy and a packet of crisps.”
@RClyfan

“[The groom] said I have done such a good job as best man that I can definitely do it again at his next wedding.”
@TheJoeyPage

Stand-up comic Chris Washington offers some general tips too. “Always start by complimenting the bride to get the away fans on board (but don’t go overboard, so it looks like you wish she was marrying you instead). Don’t go in too hard early doors. Take out any ‘you had to be there’ stories, because you probably had to be there. And finally, no matter how good of an idea you think it might be, a PowerPoint presentation containing pictures from the stag do will never, ever be a good idea.” 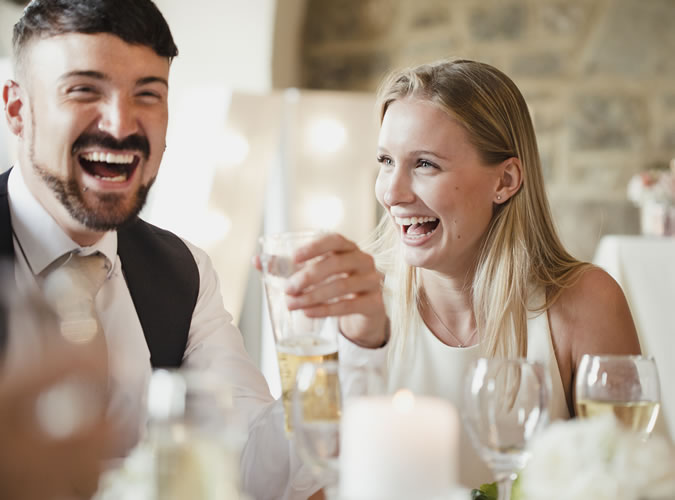 It’s all good fun up front, but there’s nothing like a rousing, ceremonious end. “The best way to end your speech is to ask everyone to, ‘Please join me in raising a glass to the bride and groom, to [bride’s name and groom’s name]. It is neat, fitting and lets everyone know your speech is over.”

At which point it’s safe to forget the nerves, safe in the knowledge you don’t an incredible job as the better… sorry, best man. 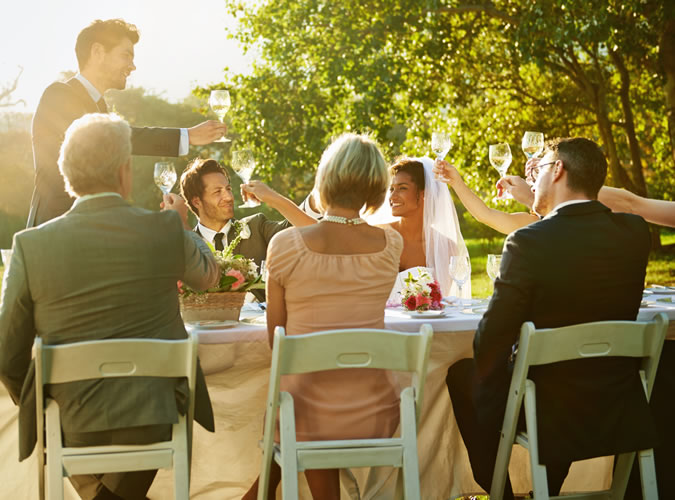 Let Someone Do The Hard Work For You

Finally, if you’re struggling, there’s no shame in getting help with your speech. And that doesn’t mean getting someone else to write it for you, like bullying the class boffin to do your homework, but using one of the many stress-relieving resources available online.

For instance, Simply The Best Man has a speech builder tool, which helps you construct a speech from customisable passages and over 4,000 jokes – what Kye calls “wedding grenades to throw at the groom” – written by comedy professionals.

“Make sure you get plenty of laughs and the groom gets a great send off,” says Kye. “And remember – you won’t get a better occasion to make a room full of his nearest and dearest laugh at his expense. It’s what he would’ve wanted.”

See Ben Pope is performing Baby Sasquatch, Robin Clyfan performing The Sea Is Big Enough To Take It, Joey Page is performing Perhaps Under Stars That Would Stretch Forever, and Chris Washington is performing You Beauty! at Edinburgh festival in August 2018.

How To Gain Weight The Healthy Way

Fitness is on what you might call a bulking phase. As of May 2017, there were almost 10m Brits sweating away at the gym every month, according to market aggregator Leisure DB, an increase of 5.1 per cent on the previous year. The same report also values the UK gym industry at a staggering £4.7 billion. In the US, over 55 million people had a gym membership in 2015, with figures no doubt continuing to climb in the years since the data was collected.