The Best Running Watches To Buy In 2018

While it might not be the first question on your mind after a punishing run (that should be whether or not you’ll ever feel your jelly legs again), you’re soon going to want to know just how fast you’ve been running. So thank goodness for the rise in running watches, which will also happen to tell you how late you are for tonight’s date while you were too busy busting a lung.

Modern running watches are like wearable coaches. They track your routes, give you split times and exertion data mid-run, and teach you how to pace yourself so you don’t embarrass yourself on the 5K you’ve signed up for. If yours has a GPS function it will also smugly tell your Facebook friends how many miles you’ve clocked on Saturday morning before they’ve even switched the kettle on.

Serious runners also want to know how well their recovery periods are going, so watches that track your sleep can help you manage your energy supplies. Some running watches are now even able to estimate your V02 max: the measurement of how well your body is able to use oxygen while working hard, i.e. your capacity for endurance. It’s another tool in a long line of functions that can show you how best to chase down your next PB.

When buying a watch to aid your training, firstly think about how you’re going to use it. Ben Barwick, running coach at Full Potential states, “If you are into running marathons and spending four hours running on race day then certainly think about your battery life. If you do a lot of sports, and running is just one of them alongside the gym, then maybe a more generic fitness watch would be better suited. If you run to music think about a brand that lets you play music from the watch without having to carry around your phone.”

If you are more into trail running, Team GB ultra-marathon runner and coach Robbie Britton recommends you look into a watch with an altimeter feature: “When you’re running around a mountain like Ben Nevis, which is roughly 1300m high, the altimeter can tell you that you are at 800m. It is an important measure when you’re not training on the flat as not all miles are created equal.” Barwick does warn against getting a watch which is loaded with features you might not find necessary for your training, however. “Think about how easy the watch is to use. I say that if my mum can use it then that is a good litmus test of a running watch.”

He adds, “Finally, be happy with the ecosystem you’re buying into. Each brand will have their own way of putting the data online, which you can usually trial for free, and you may find one of them just feels nicer to move around than others.”

Garmin has the widest-ranging portfolio of running watches on this list, and are kings of the sector when it comes to wearable GPS systems. “Asking if you run with a Garmin is like saying you’re going to Google something,” says Barwick. The American company was founded in the 1980s when satellite navigation was just starting to break into the mass market, and its first client was the U.S. Army during the Gulf War. It’s little wonder, then, that Garmin watches are sought after by running aficionados for their military precision.

Of course there is the risk that with so many tricks on offer you can buy a Garmin watch that has more features than you need (seriously, is your ground contact time really that important?), yet if you’re serious about racking up miles, an investment in one of these running buddies can certainly take you a long way. 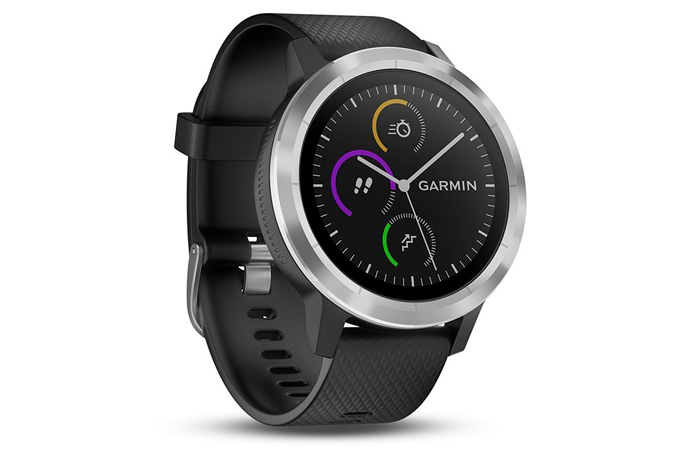 Another name that has become synonymous with the human race’s quest for 24-hour fitness monitoring, Fitbit started out with simple activity trackers. Now it produces sophisticated running watches that do the hard miles with you.

The Californian company’s first three watches – the Blaze, the Ionic and the Versa – all feature heart-rate monitors, sleep trackers and coaching workouts but be aware that the cheaper Blaze and Versa models come without (feign shock horror) an internal GPS. If you want to track your run with these, you’re going to need your phone on you.

The Versa does have a better-looking, more curvaceous shape compared to the Ionic, but if you’re unwilling to track your running distances on your phone and hankering for something that will take your running to the next level, the more expensive Ionic would be a better option. 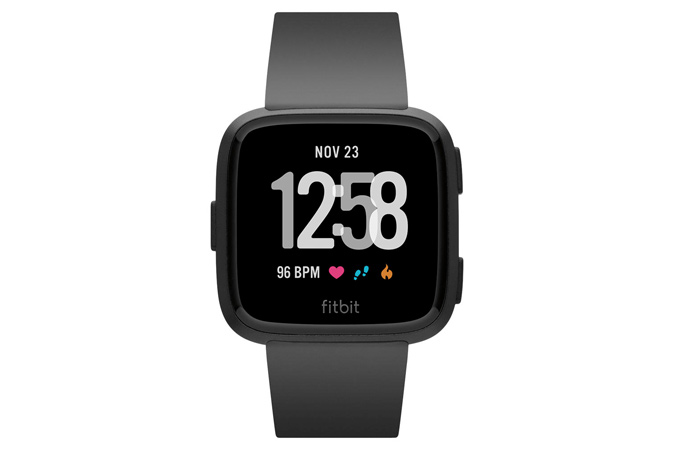 Founded in Finland, hence the Arctic name, Polar is a podium choice if you want to make it to the finish (or should that be Finnish) line first. The company filed the first patent for wireless heart-rate measurement in 1979 and three years later launched the first ever wire-free wearable heart-rate monitor – now a vital gadget in any runner’s arsenal.

As with Garmin, it covers a range of products at varying price points – if a little less pricey than its American counterparts – and you can also go phone-less with Google Play music and not have to suffer with an extra device jangling around in your pocket. Also, note the beefy battery life – handy if you can keep running for multiple hours. 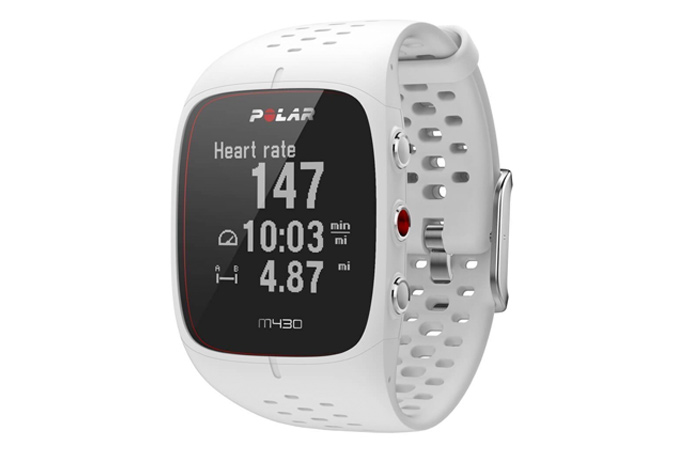 Unsatisfied with dominating the world of laptops and mobile phones, Apple decided that it also fancied taking a bite out of Garmin and Polar’s, erm, apple. Anyway, it’s providing stern competition, with the Apple Watch having the easy-to-use capabilities of its other products, while not forgetting that with Apple stores popping up in most cities it’s hardly difficult to get one fixed.

Downloaded with the Workouts app, its smartwatches include a heart-rate monitor, stop times at each mile and a GPS tracking system; however the data gathered is quite basic compared to other brands. Apple does claim to have one of the brightest screens, though, so you won’t have to stop and squint too hard to check on your pounding heart rate. 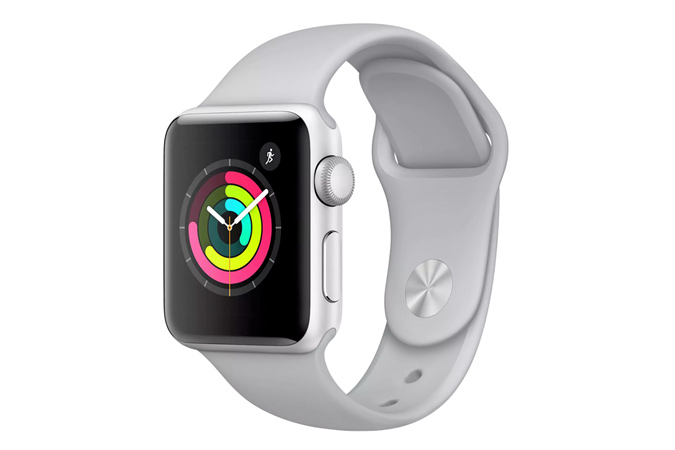 Another of the sat nav manufacturers that jogged into the fitness industry, TomTom is a Dutch company just a little younger than Garmin but no less dominant in the GPS world. The company made its foray into the running watch market in 2017, launching its first solo watch offering – the TomTom Runner. Its lightweight and comfortable fit was applauded by those in the running community, as was its relatively affordable price point when compared to Garmin.

The latest model is the TomTom Runner 3, which has all the gadgets and gizmos you need: GPS, heart rate monitor, VO2 max feedback and a built-in music player. While they might not have all the bells and whistles of your high-end Garmin watches, they are a solid mid-range offering. 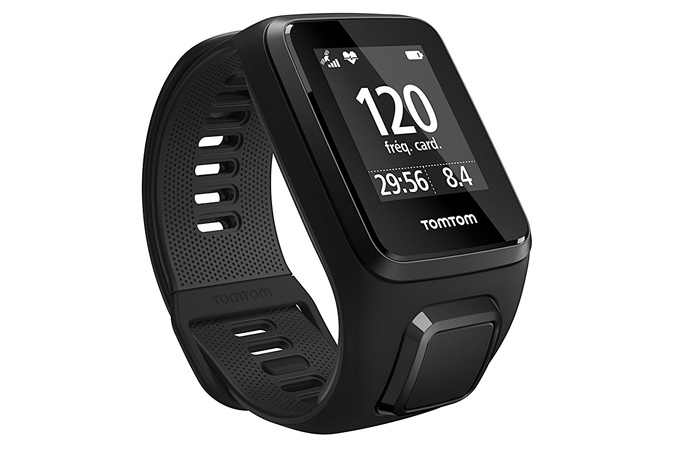 While the Swiss have dominated traditional watchmaking for the past two centuries, it’s the Finnish that are bringing the industry kicking and screaming into the modern day, as Suunto has proven. The company started life out at the forefront of compass technology in the 1930s, when its founder Tuomas Vohlonen invented a way to fill a compass with liquid so as to prevent wear from excessive motion.

It wasn’t until 1997 that the company started selling watches but it’s helped revolutionise the industry, with the Suunto Vector being the first wristwatch to feature the now oft-used ABC functions of altimeter, barometer and compass. If you’re running off-road, have one on your wrist. They’re a little bulky, but with the mighty array of data on offer, you’ll soon find room for forgiveness. 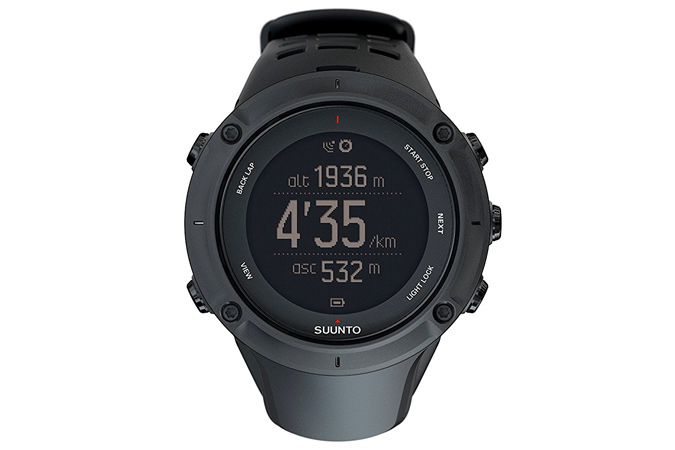 Billed not just as a fitness watch, but as a ‘lifestyle’ one, the Wellograph watch links up to an app that monitors your runs, quality of recovering sleep, heart rate and general movement.

The watch boasts a 9-axis accelerometer to more accurately count your steps as well as to prevent you from cheating with a quick shake to make up for a disappointing effort. It also has the ability to save data for up to four months of running sessions so you can track your progress in the build-up to a race. With a watch this painfully attentive there is no room for slacking.

Anything Apple can do, Samsung can do better. Or so they must be saying in the board meetings at the South Korean conglomerate, as they follow Apple from the smartphone to the smartwatch.

If you’re an iPhone fan then the Samsung won’t be for you. Although not as runner specific as Garmin, Samsung is ideal if you run with music, offering online Spotify capabilities and a rotating bezel and touchscreen on its Gear Sport model, meaning that sweaty fingerprints won’t get in the way of you finding how much you beasted that last sprint. 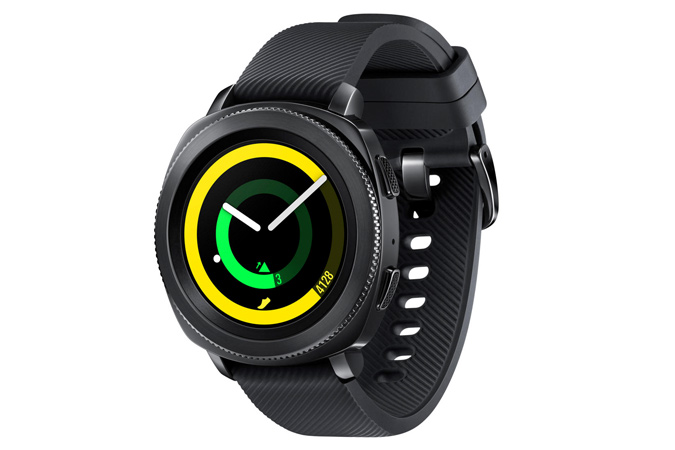 Timex is the oldest company on this list, having formed in 1853, back when wristwatches measuring every calorie and time-split were still in the distant dystopian future. The company was on its last legs in the 1970s before it made a new name for itself in the realm of sports watches. This was thanks to the Timex Ironman, which was first produced in 1986 with the help of Ironman Triathlon timekeepers.

Timex running watches are certainly the easiest to use, taking pride in their accuracy over any fancy gizmos. Their black and white 8-bit graphics provide a bit of a throwback amongst the Apples of this world and they have that all-important GPS capability. And, if you need anymore persuasion, Bill Clinton used to sport one during the early years of his presidency. 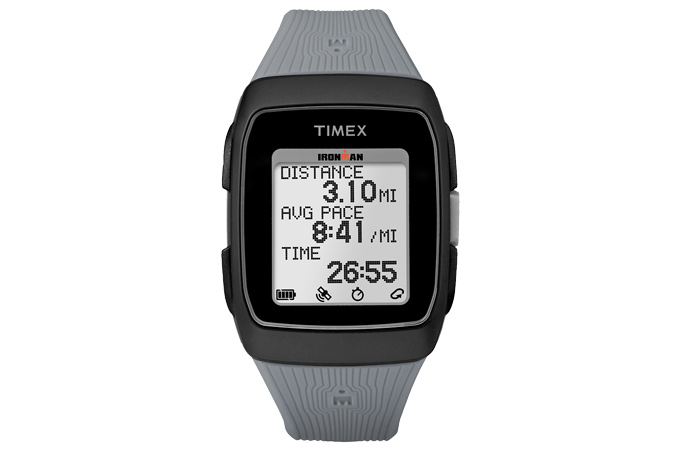 The general worry for any fitness aficionado wanting to up their running watch game is the costly outlay that might occur. So while being worlds away from Garmin, Nuband does have the whole affordable price thing going for it (leaving you more pennies to spend on the rest of your running outfit).

It’s not going to win any beauty contests, and there is no GPS, but Nuband’s watch counts calories, tells the time and is a solid budget option in a market loaded with high-end choices. 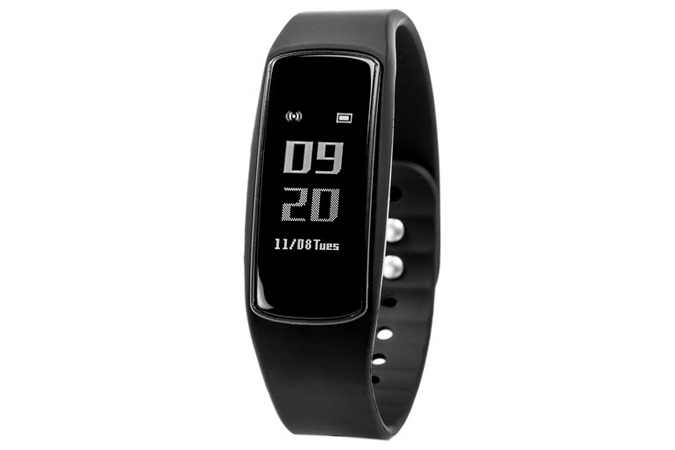 While Nixon aims its products more at surfers and adventurous types (think falling out of a plane to chase after a peroxide blond Patrick Swayze), the brand’s durability makes its watches a strong, long-lasting option for runners privy to the feeling of collapsing over the finish line and onto the tarmac below.

The battery life isn’t the best – you’ll get roughly a day’s use before needing a re-charge – and they are cloyingly bulky, but Nixon’s watches do look a lot more like traditional timepieces than the new age, square shapes championed by other brands. Maybe not one for the city slickers, but if you’re a regular trail running action man, they are a worthy alternative to the more well-known manufacturers on the market. 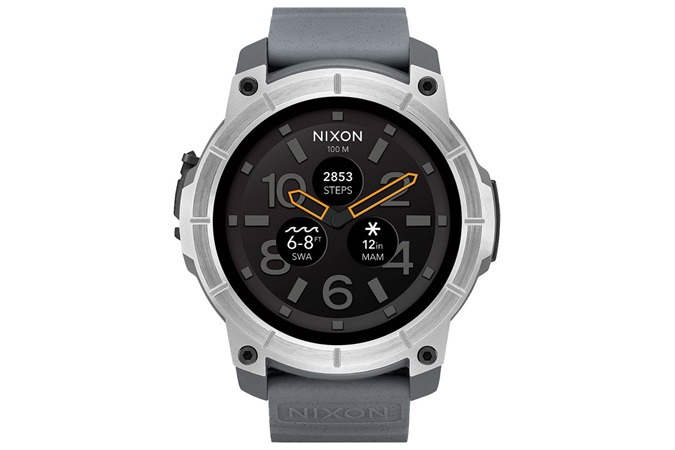